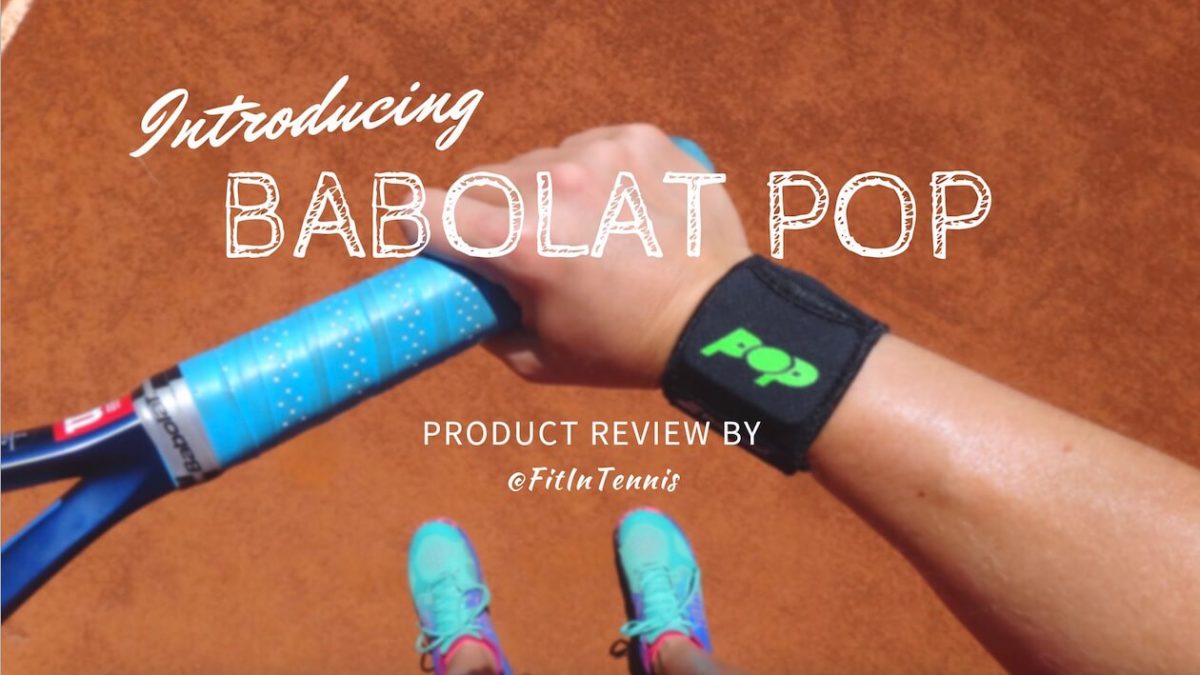 Have you tried the Babolat Pop? We have. Here is a short review.

In the last few days I have been trying out the new Babolat Pop Tennis Sensor. Below I give you my personal opinion about the device after using it during a couple of training sessions and 3 matches.

Generally speaking, the two most important features for me, which are: (1) keeping track of my trainings and matches and (2) identifying the shots and their speed, have worked just fine for me. Despite some inaccuracies of the data I generally liked the device and my experience has been quite positive. There are also a few cute, nice-to-have features such as PIQ score or community ranking but I’ve found no practical use for them.

Babolat Pop – what I love or hate about it

All the features are in the order of what’s most important to me.

Feature #1 Keeping track of my training sessions and matches: 10/10

First of all, with Babolat Pop I love having all my tennis activity tracked in one place and being able to view it on the calendar and filter by type of activity. After each activity you simply download the session into the app and qualify it as a training session, open session or a match. You will be asked to indicate the location, your opponent, type of surface, and how you felt afterwards.

I really like the possibility to track my playing days and time on court. On each given day and for every tennis session I can check my court time, number and frequency of shots, swing speed and shot type split. I can also look at the trend for the last 6 months. It keeps me motivated to spend more time on court. 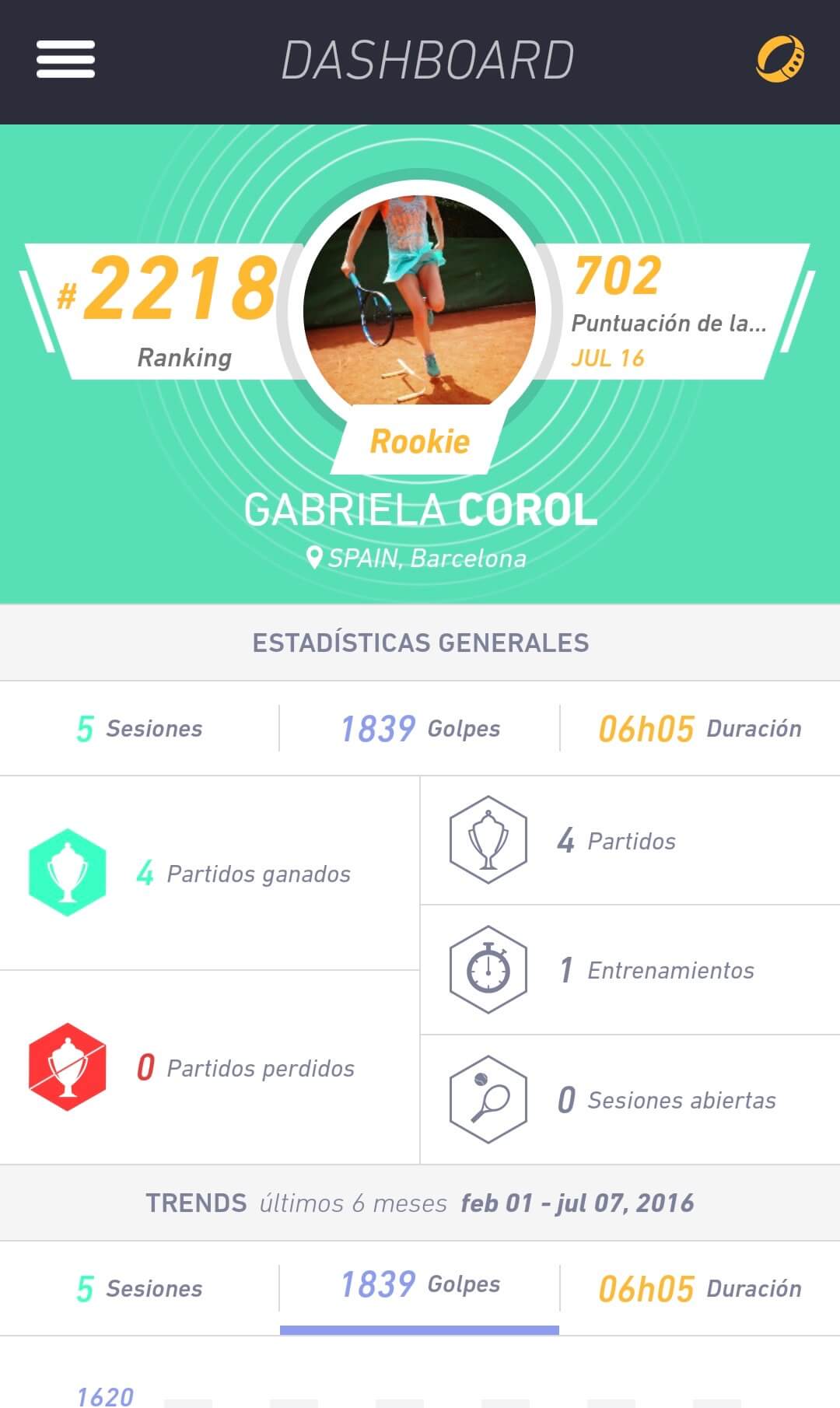 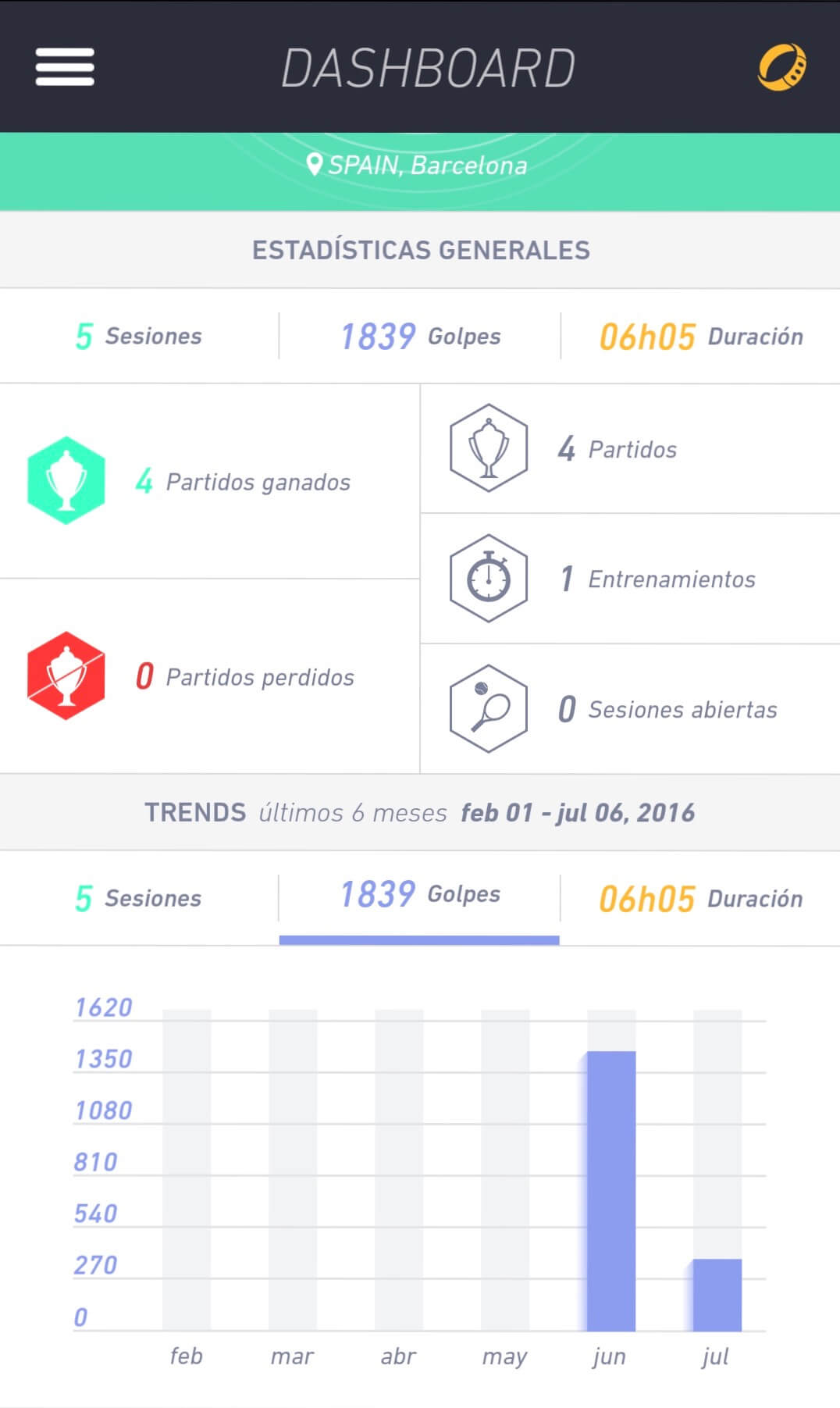 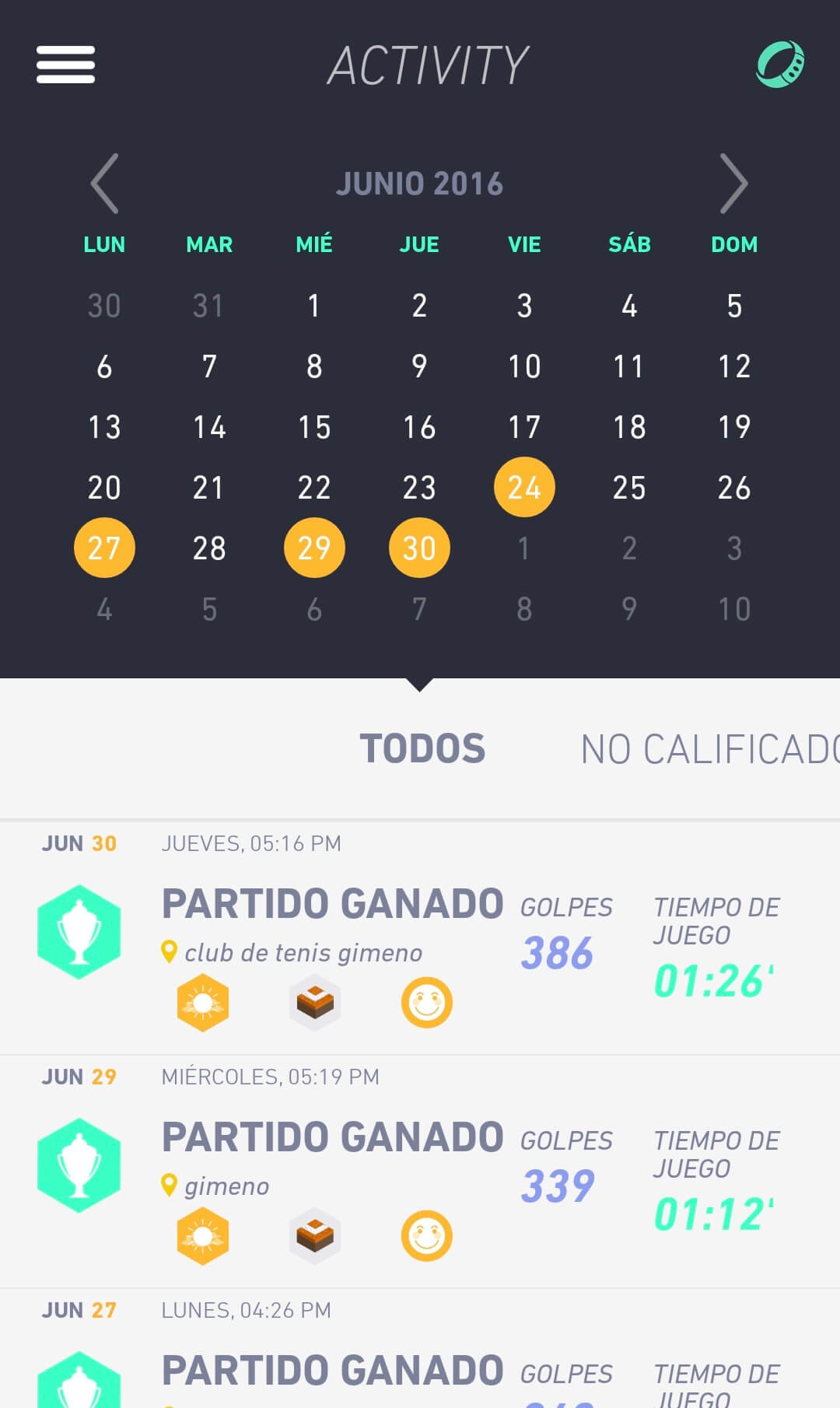 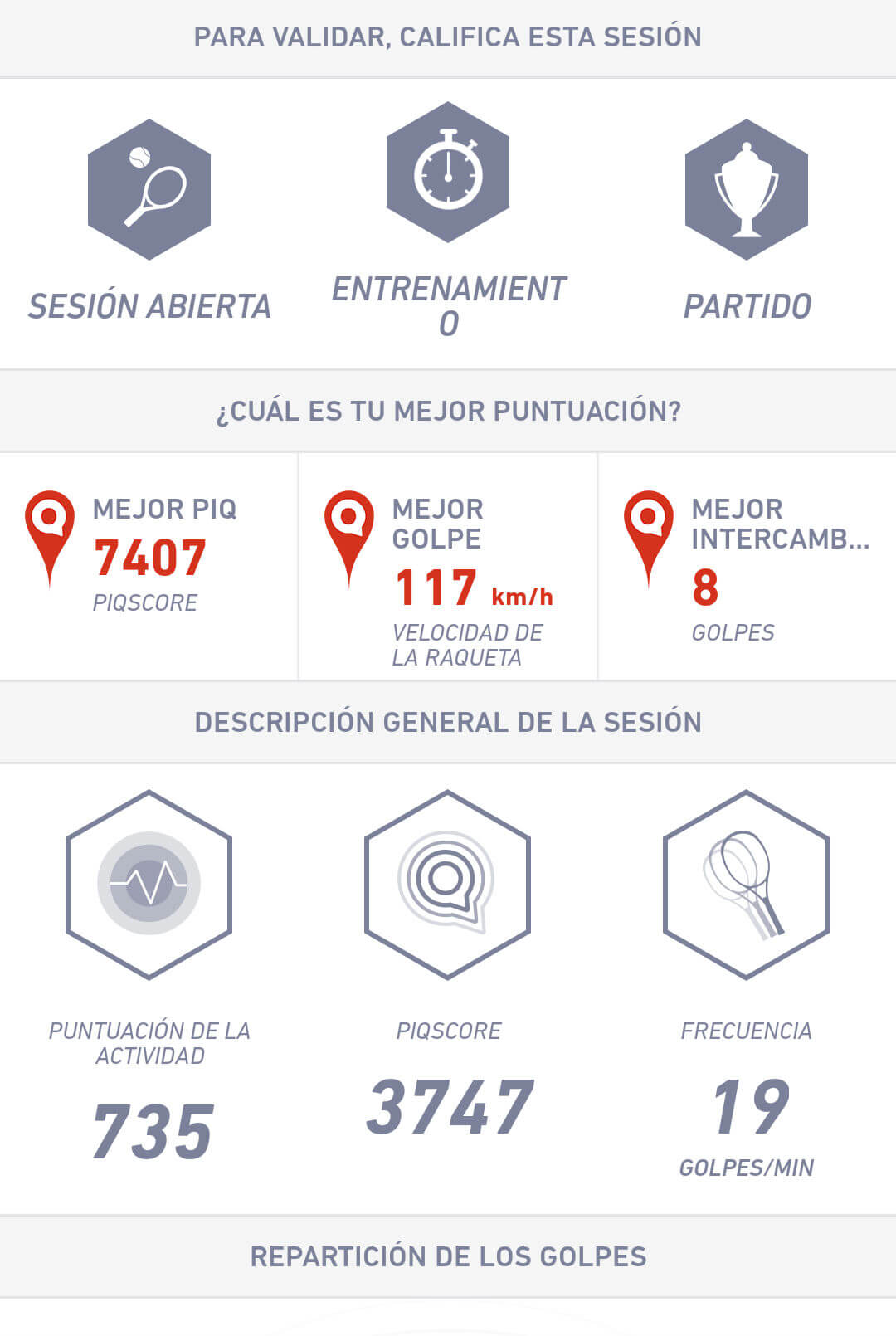 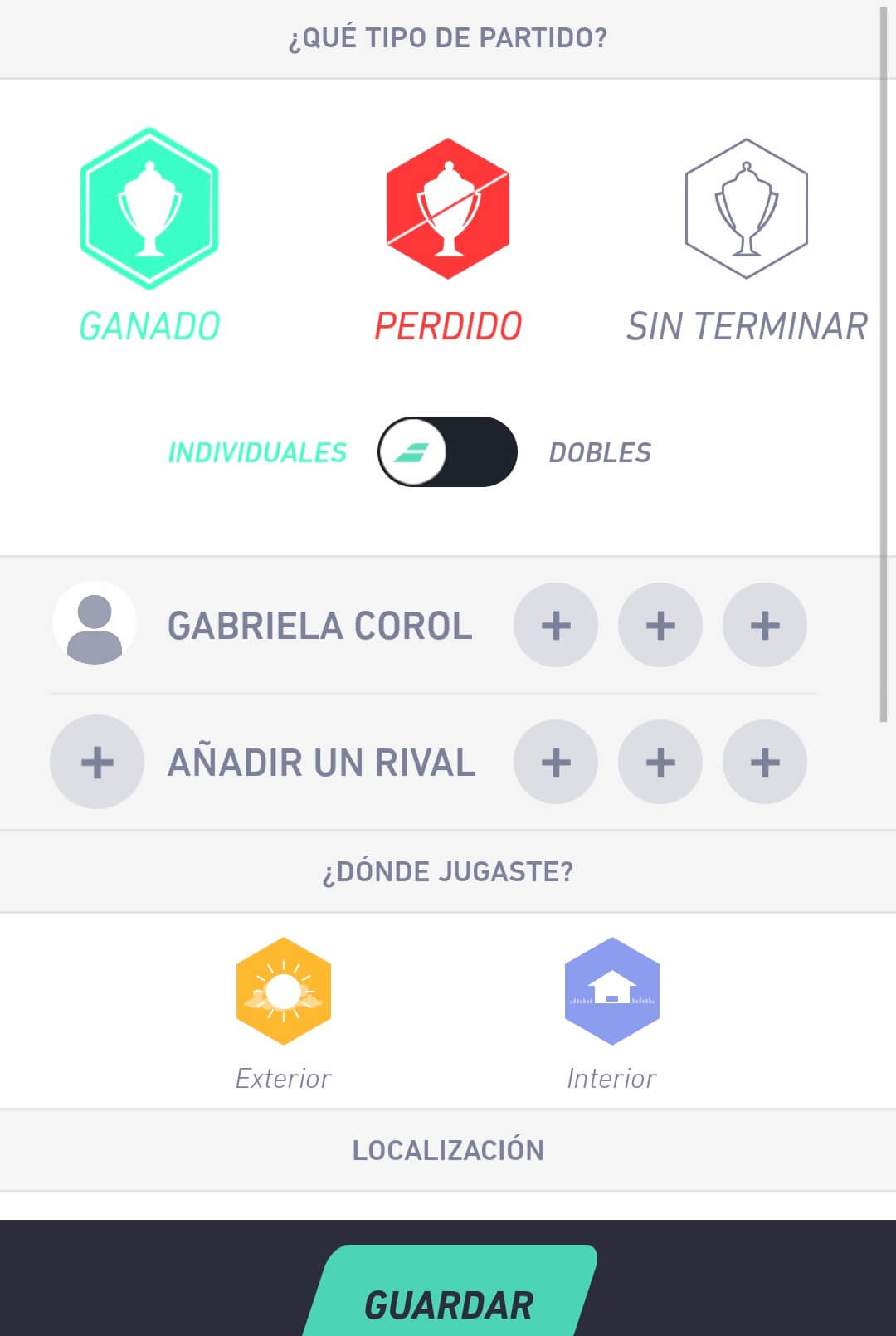 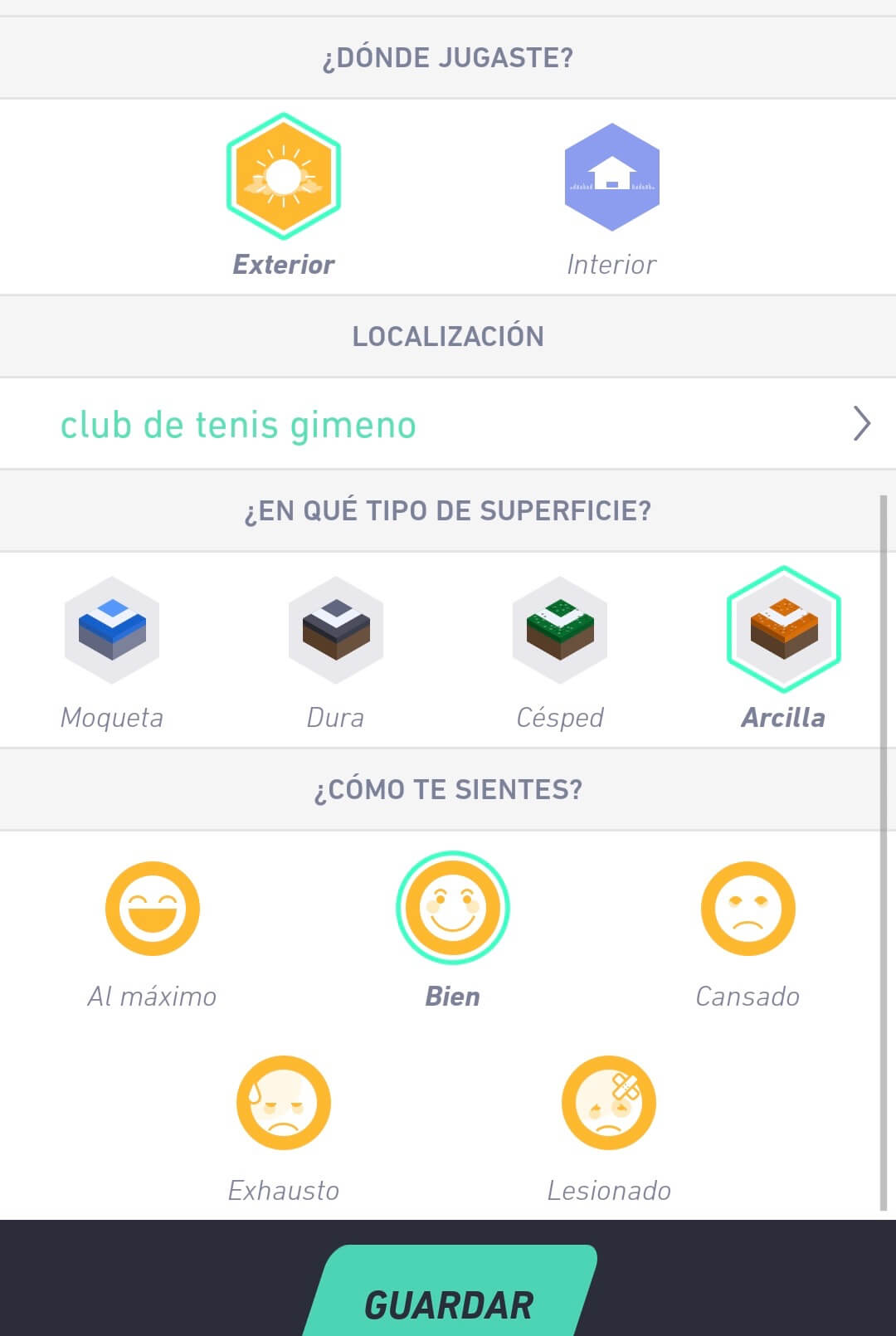 Feature #2 Identifying the shots and measuring the number or each shot in a game: 4/10

Every time you play a match or have a training session, the sensor will register a total number of shots and split the number into forehands, backhands, serves, smashes and volleys. This is great because you can know what shots you play most or where your opponent is hitting to you. Moreover, you can drill down into specific data for forehands, backhands and serves and know how many you’ve hit flat, topspin or slice and with what racquet velocity.

However, I can say with fair certainty that the sensor wasn’t completely accurate with the types and number of shots in my game. This is especially true with volleys and smashes. I know for sure that I didn’t hit as many volleys and smashes in a match as the device was showing. I guess it still needs some sensibility improvements as it struggles to distinguish between the shots and overall counts are a bit off.

In addition, I’m wondering if the sensor counts ALL the shots including when I simply pass the ball to the opponent for them to have the ball or when I just hit the ball back on a serve which was a fault. These shots should not count as they are not part of the match but they might actually do. I couldn’t find the answer. 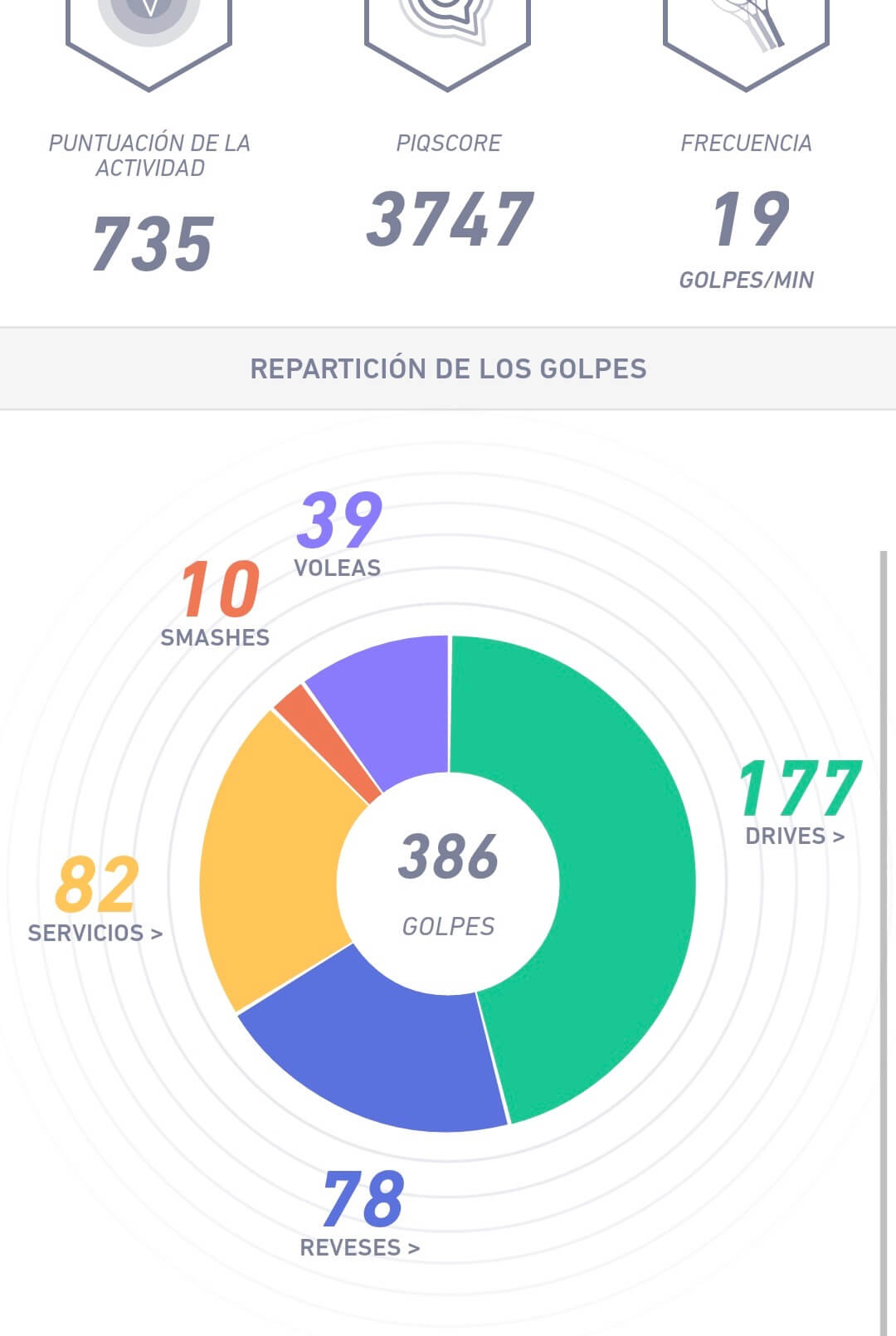 Details of shots effect and velocity 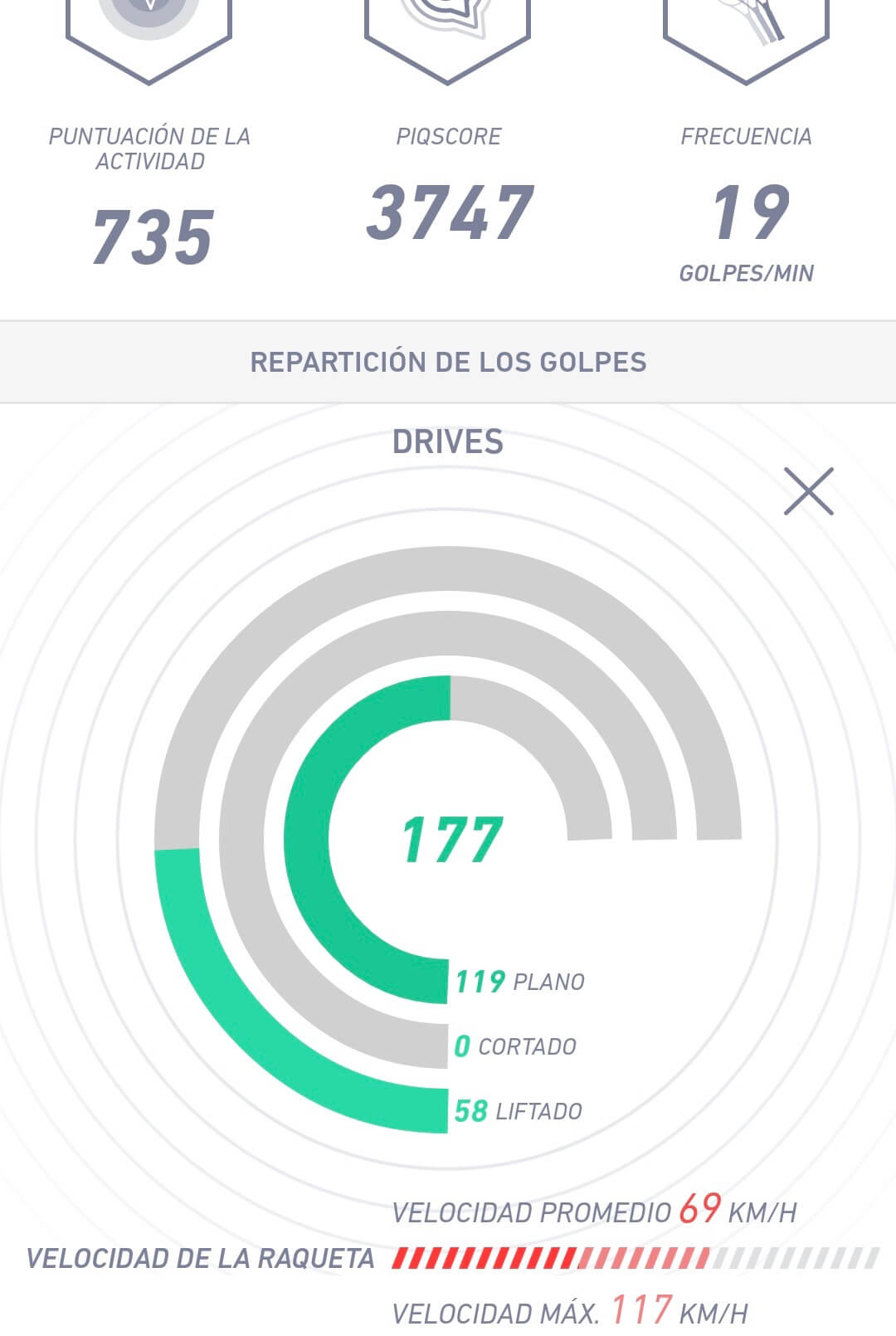 Feature #3 Measuring the maximum speed of the racquet: 8/10

The sensor will measure the racquet speed on each groundstroke and serve you play and later give you the average and best racquet speed measures for those strokes. This is a great feature which enables you to see which of your shots are faster and whether you play faster shots during your matches or practice sessions. For example, in my case I’ve noticed that my average racquet head speed is significantly slower during my matches, especially on forehand, thus I discover that I don’t play to my full potential.

It’s important to point out that that the sensor is not measuring the ball speed but the racquet head speed. The ball speed is measure by radar guns when the ball comes right off the racquet and it depends on other variables such as racquet stiffness, string type and tension, incoming ball speed, amount of spin as well as type and condition of ball used. Usually the ball speed should be slightly faster than your racquet head speed. There’s been research showing that players can generally expect that the ball speed will average 25% – 50% faster than the actual racquet swing speed so knowing your racquet speed you can roughly estimate your ball speed. I find these statistics a very useful piece of data for my game.

Babolat Community is where you can see all other players in the world who use either Babolat Pop or Babolat Play. You are able to see everyone’s profile alongside with their statistics, followers and PIQ Score. All players are ranked according to their monthly tennis activity and you can filter them by the device they use, their sex, age and country. The monthly activity score is calculated for each tennis session, and then added on a monthly base. Your tennis global activity score goes back to 0 at the beginning of each month so you need to keep playing tennis to be ranked.

When you start using Babolat Pop you will have the lowest ranking and you will be called Newbie. As you’re building your way up the ranking by playing matches, doing practice sessions and challenging others you will complete the “skills” and subsequently be called a Rookie, Fanatic, Ace, Prodigy, Unlimited, Superstar, and Galactic. I’m not sure if this is the exact order when you achieve the next level but I find it cute and useful to see who is actively involved in tennis in the community and currently using Babolat Pop.

Moreover, you can challenge other players or take up a challenge from them via the app. Challenges create a sense of friendly competition among players and it’s a way to encourage others to play.

There three types of challenges: forehands, backhands and serve and it does not mean you have to play against this particular player to win the challenge. It’s an online simple challenge to hit X number of shots but you still need to go out there and hit the balls on court. I haven’t used this feature and I’m not a big fan of it perhaps because I don’t know anybody personally in the community. Besides, it has some limitations such as lack of group challenges or social media sharing feature. 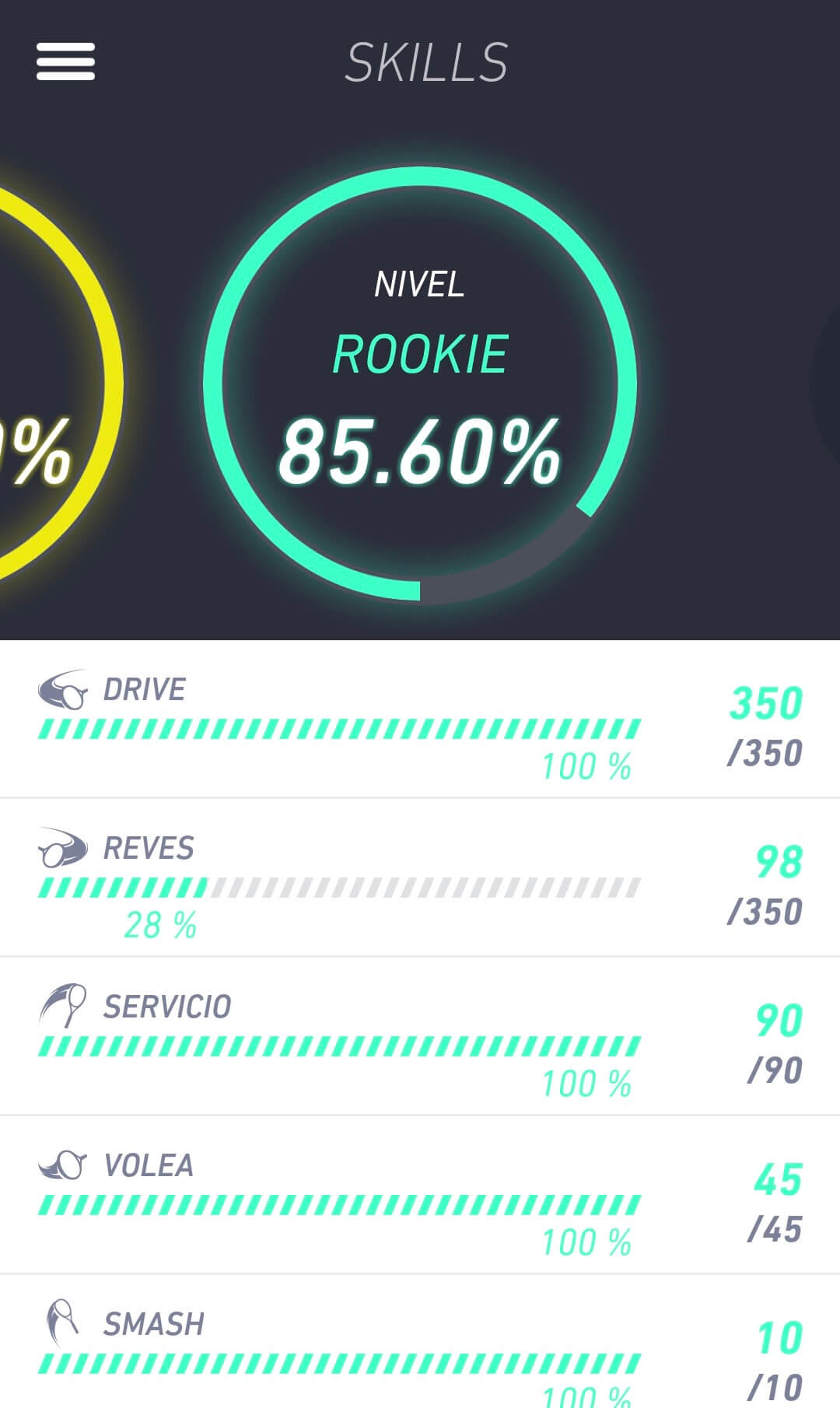 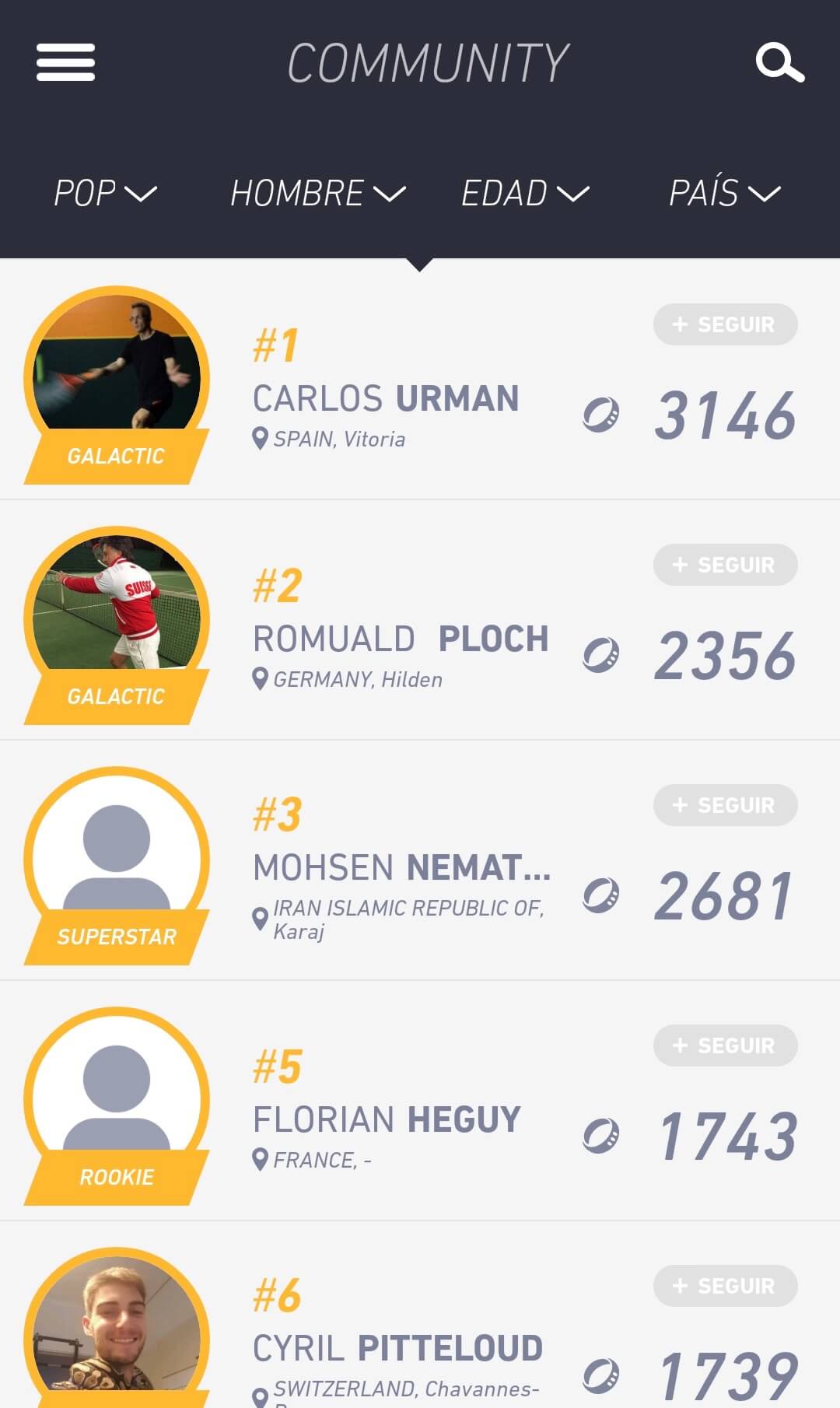 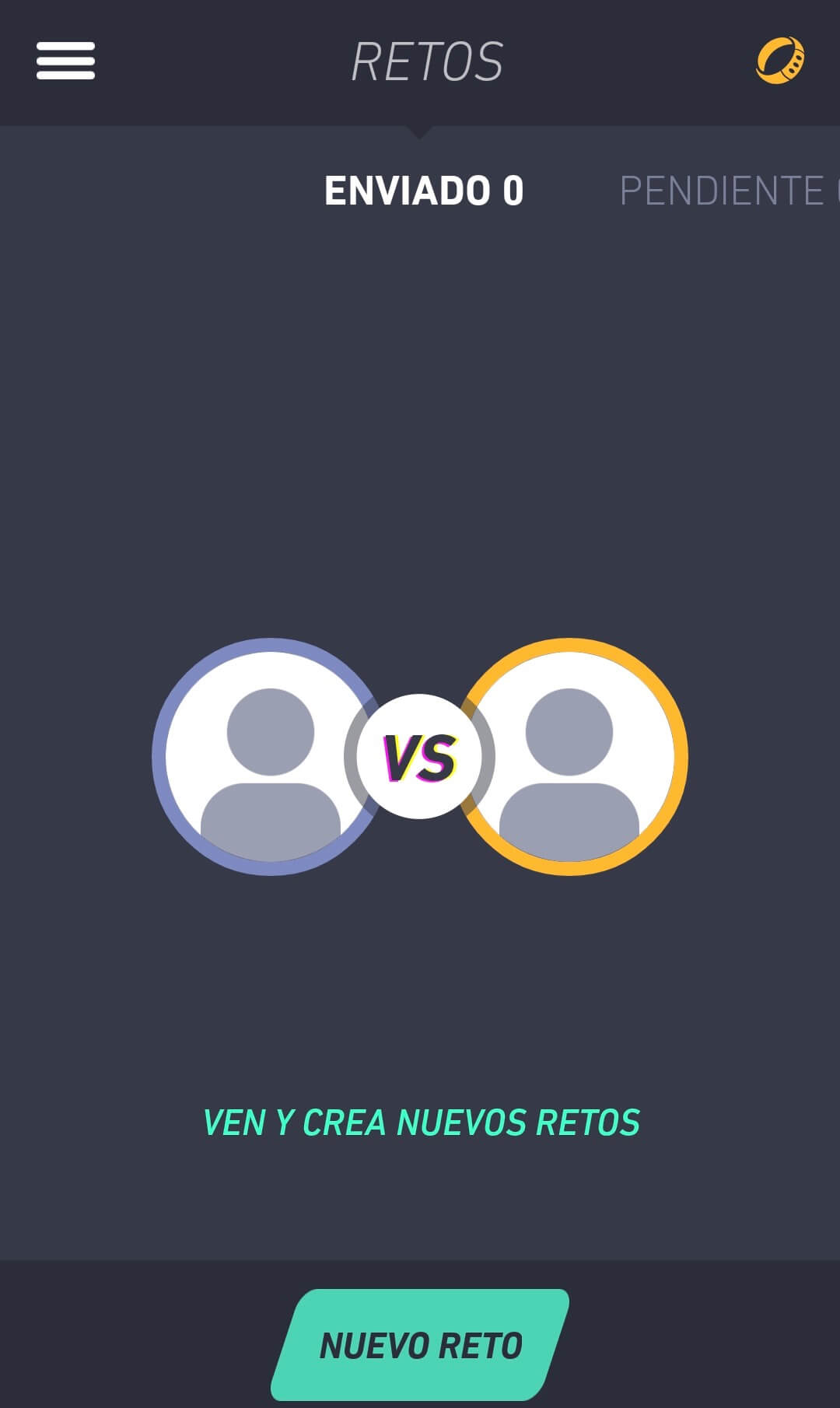 Feature #5 Calculating your PIQ score as a sum of style, speed and spin: 2/10

One of the scores in the app is the PIQ Score which is a number between 0 and 10.000. The 10.000 mark is supposed to represent professional player’s score. So how is it calculated? It is a sum of your style index, your speed index and your spin index from the last 6 tennis sessions. In each you can get up to 3.333 points. For style, the more controlled and smoother your gestures are, the higher the index. The spin is measured as the up or down velocity or your wrist during a stroke for topspin or slice and it’s a percentage index so 100% is the maximum. The speed is the average speed of your racquet when you hit the ball. The average of 180km/h would get you 10.000 points.

Honestly, I find the relevance of PIQ Score quite dubious. Why? Because do you really want all your shots to be 100% topspin or slice and all of them at 180km/h? Obviously not. A player will play a variety of shots with a variety of spin, speed and style. It will depend on the situation in the game and player’s style and tactics. You may play a lot of angled volleys and dropshots that are usually slow shots. Also, you may play a lot of flat high-to-low approach shots and it’s perfectly valid to win points. Maybe it’s just me or I don’t fully get it but for me the PIQ Score is skewed towards playing hard with a lot of spin on the ball which is not always necessary to win points. 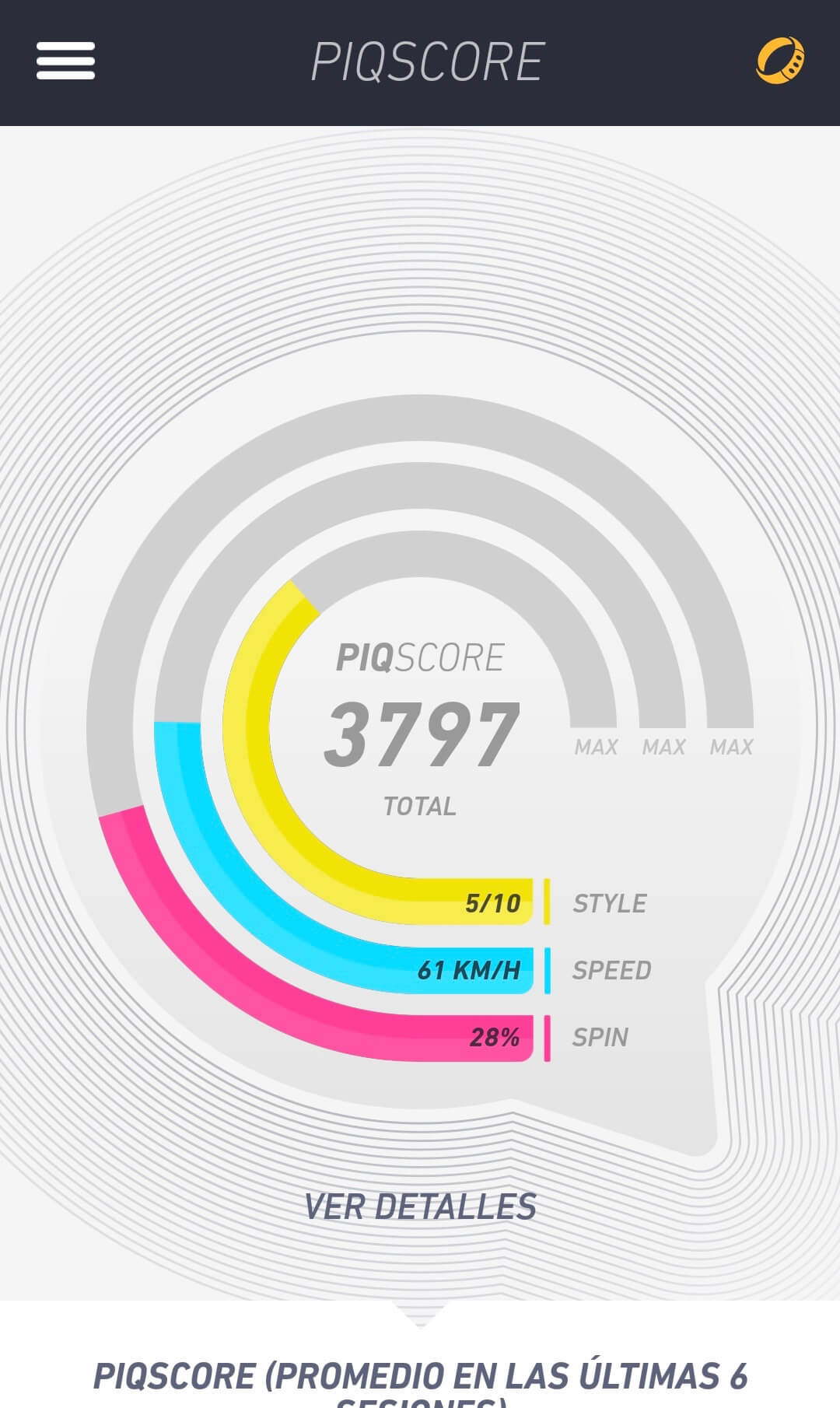 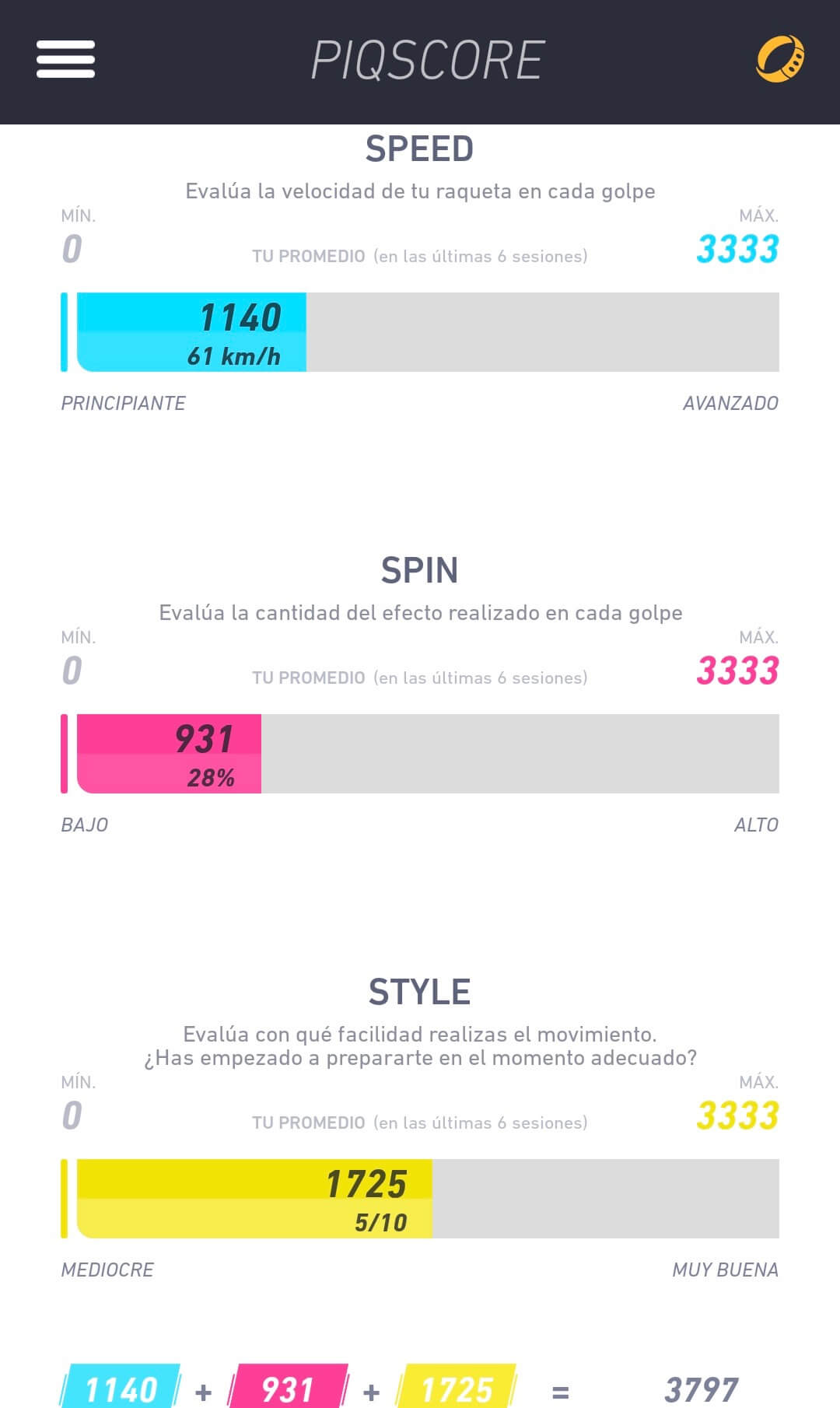 I have contacted Babolat’s customer agent about changing the language in the application and got a quick reply with easy to understand guidelines. I’ve read some bad opinions about their service but need to say that in my case it has been helpful so far.

On the one hand it’s great to be able to discover the Babolat Pop on my own and I believe every simple software should be self-explanatory; however, I lacked some serious in-depth video how-tos to guide me how to use the device.

The digital assets for Babolat Pop that I’ve found online are Babolat Pop FAQ section and PDF User Guide. I think it’s a good place to start learning about Babolat Pop. I also found that Tennis Warehouse did some videos on the use of the app.

On some occasions the download of the tennis sessions wasn’t fully completed as the Bluetooth connection suddenly stopped. But usually after I keep trying a few times it would eventually synchronize successfully.

The Babolat customer agent told me to upgrade the firmware for my device in order to improve the reliability of software which I immediately set myself to do. However, until now I’m still struggling to update it due to an unknown error.

I’m not sure it’s me sweating during the game (it’s summer here and very hot) but the band pocket for the sensor started showing signs of wearing off after only 5 sessions!! I really thought I would be able to use it at least a couple of hundreds of times before I need to sew the band…

Where to buy: Tennis-Point

Overall, I really like the device and the actionable data it provides about my game. I only wish I could use it more often and see how the firmware updates correct some of the inaccuracies. Now, I’m going to return it to the shop due to the band ripping off issue and see how this gets sorted.

See you on court!