In this tennis class, Javi teaches how to properly hold the racket for the one-handed backhand and what the right grip is for a beginner player. He also teaches the student how to technically execute the basic swing of this stroke in three simple steps. In the end, we will see how to generate some topspin and how to correctly follow through.

For a beginner player, the one-handed backhand is not easy to learn because not only are we hitting the ball on our non-dominant side but also we are using arm muscles that are naturally not very developed, such as the triceps. Therefore, when we start to learn this stroke from scratch we must have a lot of patience and go step by step.

The grip for the one-handed backhand is eastern backhand grip, which is very similar to how we would grip the handlebar of a bicycle. Basically, we have to place the index finger’s knuckle on the first bevel of the grip, which is the top side if we put the racket perpendicular to the ground. This grip allows to play both flat and with topspin.

We will be explaining the details of this grip in future tennis lessons for beginner players.

Javi demonstrates three simple stages of how to learn to do the backswing: preparing the racket backwards horizontally, diagonally and finally upright.

In order to be able to do the backswing with the racket in an upright position, first, we should grab it with our non-dominant hand at the highest point of its throat and then bend and raise the non-dominant elbow. In this way we can advance towards the ball rounding the racket below the ball and thus generating a bit of topspin. 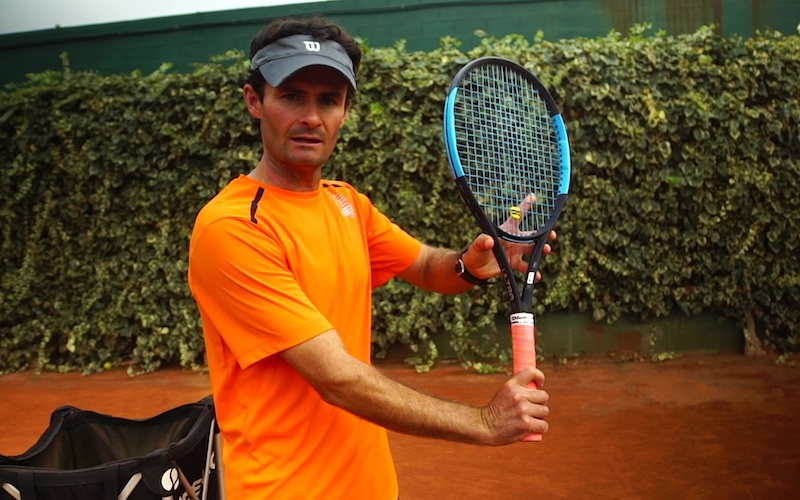 Start adding spin to the ball

At this stage we are swinging forward in the circular motion and also turning the wrist at the end to finish with the racket upright instead of horizontally. Consequently, the student will finish the movement with the elbow stretched and raised to shoulder height. The back foot should be twisted by lifting the heel to facilitate the turning of the upper body. We can see the opening of the chest with the arms spread in the opposite directions.

The main learning points from this tennis lesson for beginners are:

Beginner players should use eastern grip and prepare the racket upright!

In this video, Javi explains how to hold the racket with the correct grip for one-handed backhand. He also shows three exercises to teach the player how to technically execute the basic swing of this stroke in simple steps. In the end, he demonstrates two additional exercises to start generating some topspin.

Check out our tennis lesson to learn the correct two-handed backhand grip and swing.

Hold the racket horizontally during the preparation phase

Hold the racket diagonally during the preparation phase

Hold the racket upright during the preparation phase

Add spin by finishing with the racket pointing up

Finish with the elbow straight and at shoulder-level

Hi guys! I’m Javier from fitintennis.com. In the previous videos we were working on the one-handed backhand without the racket. Now we can move onwards and start using the racket.

The first thing I’ll explain is how to hold the racket. First, we’ll talk about the grip. Later, the 3 phases to learn backswing - the first is horizontal, the second diagonal, and the third is upright. Always finishing forwards but shortening the stroke a little bit. And to finish off, I’ll talk about how to give the ball spin, which is done using a little flick of the wrist.

From there we begin the stroke. The first part will be to prepare as we have been doing, with the elbow close, without making a large backswing, and later just moving the racket forwards and stopping just in front of the body. The position of the legs is the same as we had in the previous videos, as we swing forwards we end with the sole of the left shoe facing the back fence. Always finish in front with the racket horizontally, hitting the ball underneath it, and remembering to hit flat for now, just pushing the ball.

For now, the player doesn’t have to move. We’ll start from the sideways position. Stay sideways, Silvia. OK, the racket and the elbow stay close. I’ll just feed the ball and she has to do the stroke. She doesn’t need to do the split-step or move, she just needs to concentrate on the technique. Occasionally, I’ll check if she’s making any mistakes: the grip, the end of the stroke, etc. And I’ll give her some feedback so that she can understand how to fix it. The grip is correct, remember that the left hand holds it here... When you hit, you follow through and in order to hit the ball to the other court, the student simply has to understand that they have to hit it from below. She doesn't have to do any wrist movement yet, we have to keep it simple - just using the arm and feet. Once we see that the student understands the exercise and knows how to do it, we go a little further, one more step.

If we were starting with a horizontal preparation before, now we can start to lift the racket up a little bit. Everything stays the same, but instead of having the racket horizontally, we lift it diagonally a little. We continue hitting the ball flat and from below for now - eventually we’ll start hitting it with spin, but for now we’ll start diagonally so the player doesn’t feel stressed and learns the basics bit by bit.

In this case, Silvia, the grip is great, the feet too, but we can see she moved the wrist. It’s not time for that yet. She has to go slowly and needs to get used to positioning the feet better and just pushing the ball, she doesn't need to go through it yet. As she is progressing well and is adapting to her new technique, we can go to the next step.

We continue from where we left off - the racket being in diagonal position, now we tell the player to place it upright, lifting the left elbow a little. After this preparation, she will turn sideways, hit and continue to freeze the stroke in the same place as before, horizontally. We don’t need to complicate things. Soon we will add spin - that will be the next step. Very well, the student is understanding how the basic motion of the one-handed backhand has to be done and now we introduce the final stage, the last tip so that they can begin to hit with topspin.

It would be the same as she has already been doing but in the end we turn the wrist. What we have been doing until now was starting with the racket held upright, brushing the ball from below and ending horizontally. We don't need to complicate things with more information, the student just needs to think that, when finishing the shot, they has to do this. Finish with the racket upright. It is not necessary to insist that they swing the racket lower, etc., all this happens naturally if they focus on turning the wrist upright. And this will start to add spin to the ball. Now we'll see how.

Now when you hit, you freeze at the end. Freeze, stay like this. So here we see that the elbow is bent a little bit. It is better that it is not tense, rather that it is a little straightened and raised at about shoulder height. The racket is great, the foot should be turned a little more. All right, so our hips rotate and follow through. This hand is correct. The chest could be opened a little more, but the important part is that the arms are spread and the right one ends up as it is now, with the arm stretched out and at more or less shoulder height.

Now for the next progression, I will go to the other side of the court, so we will be further apart. The balls will begin to feel a little more realistic, even though I am still feeding them to her. But now she will have to start moving and finding the correct distances and heights. All right guys, thank you, and see you soon!

All about one-handed backhand

All tennis stances for attacking shots on forehand and backhand

Simulating the movement of one-handed backhand for beginners