This tabata fitness workout for tennis players is focused on improving your cardio endurance and increasing your pulmonary capacity. The two previous tabata routines were focused on lower and upper body workouts with tennis-specific exercises which we did on a tennis court. In this video, Gaby is doing 8 intense exercises off-court meaning you can do them anywhere. She also shows you some variations for each exercise and how to make them easier or more complicated depending on your fitness shape and goals. 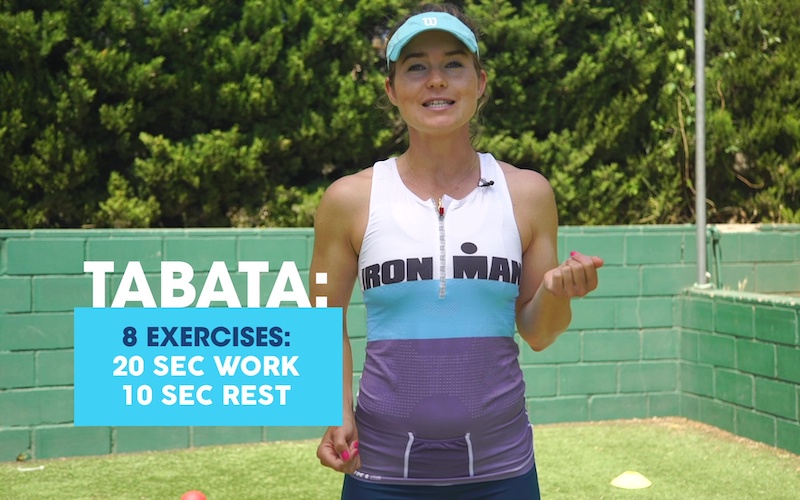 Tabata is a Japanese military style high-intensity interval training (HIIT) workout, featuring a mix of aerobic and anaerobic exercises. One set of eight drills takes 4 minutes to finish as you are working out for 20 seconds and taking 10 seconds to rest and prepare for the next one. Between the sets you can sip some water and relax for 1 minute. Repeat it six times for a 30-minute tabata training session.

Why is tabata good for tennis players?

A tennis match has a very similar structure to tabata workout. A tennis player plays one point at maximum intensity and the point usually lasts less than 20 seconds. It is followed by a short break between points which in tennis lasts exactly 20 seconds. During that time players have to quickly bring their heart rate down to normal. Working at 10-second breaks in tabata prepares you for better recovery times. A game in tennis lasts approximately 4 to 8 minutes and there is a longer rest between games. And in order to finish 2 sets a player has to play between 12 and 26 games. A tennis match can last for 2 to 3 hours and tabata is a great way to create the cardiometabolic adaptations similar to HIIT rather than moderate-intensity continuous training (MICT).

The equipment Gaby is using in this tabata includes a mat, a skipping rope, a cone and a small 1-kilogram heavy medicine ball. For variations she suggests adding a loop elastic band and a tennis ball. Nevertheless, you could perfectly do the whole workout without any equipment.

In this video Gaby is doing 8 exercises, each for 20 seconds with 10-second rests between them. Each exercise has a different objective. The first exercise where she is doing squats and boxing arms helps warm up the arms and legs. The exercises where Gaby jumps forwards, sideways or uses the skipping rope will improve your leg explosiveness. Burpees and mountain climbers are great for muscular endurance.

We love doing tabata with our players and seeing them sweat during our fitness sessions!

Jump and fast feet back

Hi tennis players! This is Gaby from fitintennis.com. I'm a fitness trainer and a tennis coach here in Barcelona.

In today's video I'll be doing a tabata workout so it's a high intensity interval training. I will show you a set of eight exercises where each one takes only 20 seconds to do and is followed by 10 seconds of rest, so one set lasts for four minutes. I will do one set but ideally you will want to do about seven to eight sets to make it a full half an hour routine. For each exercise I will show you some variations, to make them easier or more challenging, depending on your fitness goals.

In the two previous tabata videos I showed you some very tennis-specific exercises and I was on a tennis court to do them. Today, I will focus more on cardiovascular, general fitness activities but they are still intense and they are still very good for tennis players. Remember to spend about 10 to 15 minutes warming up previous to the session so all your muscles are ready to go. Let's get started!

All right, so here are some variations to keep those exercises interesting and slightly different for each set. So for the first exercise, we were doing boxing arms and squats. In order to make it easy, you can simply do a squat, and to make it complicated you can add a jump, so boxing arms up and jump. Great, so the second exercise I was doing burpees, so an easier version of the burpee is just without doing the push-up, and to make it complicated you can go with a wider stance on the push-up, which makes it a little bit challenging.

In the third exercise, I was using the skipping rope to jump. So in order to make it easier you just simply jump like that, with one foot in front and to make it complicated you can, for example, jump backwards. All right, for the fourth exercise I did mountain climber. So I actually did the easiest version of it so I'll show you two more variations that are both more difficult. The first one is when you put your foot in front when you do it, so it would look like this. And the second variation, which is more complicated, is with your knee closer to the elbow. Like this!

So in our fifth exercise, I was jumping and pedalling back fast feet. So in an easier version I wouldn't jump, I would just go forwards and backwards with fast feet like this, and for the more complicated version I probably have something heavy in my hands when I jump, so something like a small medicine ball would work.

For the next one, the abs, the easier version is just doing the bicycle abs, so like that. And for the complicated version I would probably want to hold something heavier in my hand. So I do the Russian twist with a small medicine ball and it gives some additional challenge for the abs. All right, for the next one I did the skater, so I did the version with the medicine ball which is kind of challenging, so I will show you the two easier versions. First is with the tennis balls. So instead of a medicine ball, I would use tennis balls to go, so it would look like this. Just touch the tennis ball to your toes. And another version is just without anything in your hand, so you can just simply touch the toes with your fingers.

Alright, so the last one the shuffling around the two cones in eights. In order to make it easy you can just simply go from one side to another with lateral steps, like shuffling, like this, instead of going around. And to make it more complicated you can use the loop elastic band. Put it between your legs, like this, and now when you go and you have to open up, and go down, it really makes a difference because you struggle more to open up your legs when you use the elastic bands.

This is the tabata workout that you can do anywhere with some props. It looks difficult but it's a lot of fun, and you will definitely notice the difference when you go on court and you feel like your cardiopulmonary resistance is much better. Tabata is a great way to improve your cardiopulmonary resistance and we love mixing tabata and tennis so stay tuned for more videos like this. See you!

Improve your cardio endurance with this TABATA workout